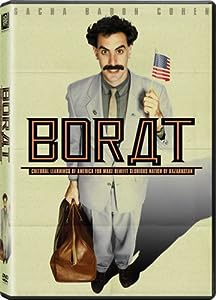 Cover via AmazonCleaning out my desk and my mind today, and look what I found!


Also some time off but requiring some planning is Lark Camp. Sounds like a great lineup of classes, workshops, and fun for anyone interested in world/folk music and dance. Lark Camp runs July 27-Aug. 4, at the Mendicino Woodlands in California. More info at www.larkcamp.com

Anyone seen the Borat movie yet? Officially titled "Borat: Cultural Learnings of America For Make Benefit Glorious Nation of Kazakhstan," it looks amusing and culturally subversive enough to be funny...maybe. A vote firmly in its favor is this review in the Christian Science Monitor, a newspaper generally known for its sensitivity to global culture.

More from YouTube:
trailer from the second installment of the 1 Giant Leap films.
teaser from an upcoming documentary on Hip Hop in Uganda
playing of the Kulintang gongs in the Phillippines
stroking the sarod by Alam Khan, son of Ali Akbar Khan
crooning by Yma Sumac
singing like a Nubian, and
grooving like only Tinariwen can...

Ah, my mind feels so much lighter now! Any questions?

I had heard about the Ugandan documentary, but hadn't seen anything of it yet. Thanks for the link.