Speaking of Gypsies, there's a great movie now making the rounds of film festivals. When The Road Bends: Tales of a Gypsy Caravan is a documentary about the Rom (Gypsy) musicians who participated in the "Gypsy Caravan" concert tour. Stark contrasts emerge as the film cuts 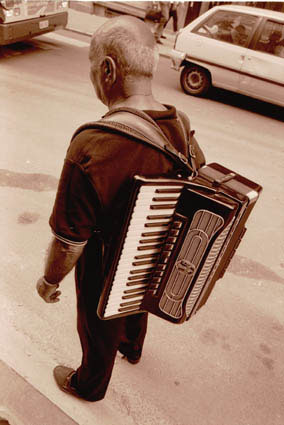 between the musicians' life on the road (in the USA and Europe) and life at home. Equally fascinating are the interactions between the musicians from different parts of the Romani diaspora. They don't all speak the same languages, their music is different, and their physical appearance has wide variations. They can't verbally define the essence of what makes them one people, but the brotherhood is clear in their music and they way they bond during the tour.

The artists included are Esma "Queen of the Gypsies" Redzepova of Macedonia [mp3], Antonio El Pipo Flamenco Ensemble of Spain [mp3], Fanfare Ciocarlia of Romania [mp3], Maharaja of Rajasthan, India [mp3], and Taraf de Haïdouks of Romania [mp3]. Be sure to check out the movie trailer.

This is a challenging but life-affirming film that confirms the power of music not only to change and connect hearts, but also to make practical changes, like bringing electricity to a village. Catch it on tour.