During a live set on KCRW today, Angelique Kidjo talked about performing at the Vancouver Winter Olympics...outdoors. She said, in effect, "I'm an African, and you're asking me to perform outdoors, in the winter, in Canada?" Consummate professional that she is, I'm sure it was a great show even if she couldn't feel her fingers. 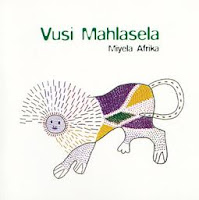 African music is very much on my mind after seeing Vusi Mahlasela perform Saturday night. Accompanied only by electric guitarist Mongezi Mtaka, he wove spellbinding music from the first note. He is so soft spoken between songs that it was difficult to catch all of his words. But he spoke passionately about the men he calls "the grandfathers of humanity": Mandela, Tutu, and Gandhi. (What, Vusi, no grandmothers?) And he spoke of forgiveness, even of those who have gravely wronged us, saying "we should wear it like a crown."

Maybe that's why I love his music so much. This rich vein of humanity that emerges in a such a pure, clear voice with a range from sorrow to celebration...sometimes in the same song. On this title track to the 2000 album of the same name, Vusi sings in Xitsonga and English about teaching a new generation of African leaders.

This is the time for you Afrika
time for you, the giant, to wake up
and wipe your sleep away

I believe only two of Vusi's albums are officially available in the USA -- The Voice and Guiding Star -- but of course through the miracles of the internets you can find others. And they're worth finding, just as he's definitely worth catching live in concert.