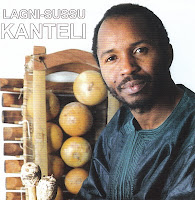 I ran into balafon player Naby Camara in Seattle last week, and he handed me this wonderful CD, named for his home village in coastal Guinea. Despite trying to keep tabs on the great African musicians in the area, this album had passed me by since its release in 2007. Which means that I've missed three years of really stellar balafon tunes. I can't tell you much about the album or song origins, since the liner notes contain only the musicians names and a few words about each tune. What I can tell you is that this buoyant, rousing music is mostly made up of traditional West African music, but also includes some Western touches, such as the electric guitar and drumset on "The Sharks of Guinea."

Camara's balafon is soft and clear, without the heavy buzzing that is traditional in some styles. So the sound is accessible, and the variety of celebration songs and work songs keeps things interesting. The bad news? Unless Naby hands you a copy, you may not be able to find Kanteli. It's not on his website, though you can find three earlier albums there, and you can get his 2004 album L'union Fait la Force from CDbaby. I'll mention this problem to him next time I see him; this stuff is too good to keep hidden!
[mp3] Naby Camara: Denykemba
From the album Kanteli