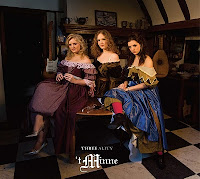 Three Ality sounds like someone moved Varttina to the Netherlands and gave them electric guitars. It's a compelling blend of medieval and modern, from the opening title track, which begins with a berimbau and soon blossoms into a full-fledged rocker with a wall of drums, strings, and female harmonies. It's a traditional tune about a spurned Dutch woman swearing off men, though in the arrangements by Onno Krijn (who you might remember from Don't Be a Stranger/One) you'd hardly guess that many of the songs on the album are from the dusty old "Antwerps Liedboek."

Krijn, who also produced the album, makes an argument that his arrangements aren't so unusual for these songs.

Like 17th century Amsterdam, 16th century Antwerp was a melting pot of cultures, owing to a lively world trade. Hence it seems likely that this was reflected in the folk music of those days. Turkish sailors, African slaves, Chinese traders all worked and lived together. That's why the exotic textures on some of the tracks are not as farfetched as might seem at first glance. Having said that, I have not intention whatsoever to be historically accurate, but I do aim to kick these songs back to life again.

The album includes quieter songs, like the ballad "Aanmerk Toch Mijn Geklach" backed by piano, "Den Winter Is Een Onweert Gast" with guitar, and "Melancolie" with marvelous support by piano, guitar, and kora (by Cherif Kouyate).

But my ear is drawn to the more lively pieces such as "Wij Meiskens Net," "Een Lodderlijk Vrouken," and "Oud Grijsaerd." The latter is a song about a young wife who takes a lover when her old husband is unable to fulfill her needs. Though the Dutch lyrics are largely impenetrable to me, the booklet includes a note in English on each song's content, and many are about love, loss, death, sex, and breaking up. You know, the same stuff kids sing about today.

Upon further reflection, the vocals may remind me a bit of Varttina, but this is really the female answer to medieval boy-bands such as Corvus Corax, and may well appeal to their listeners as well as general world-music fans. 't Minne is a marvelous, surprising album rich with modern medieval music, and I highly recommend it!

very cool! i work for mother tongue music and they are always looking for hidden international music that can work in continuous mixed compilations with various electronic and world music. thanx for posting.
www.mothertonguemusic.com