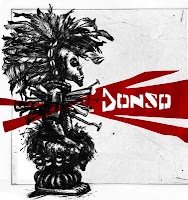 Successfully blending the sounds of tradition with new musical elements is a journey fraught with peril. An artist risks criticism both from outraged traditionalists and from critics who see the music as simply cashing in on some current trend. African music isn't immune: For every great rediscovered track on a compilation such as Strut's recent Afro-Rock Vol. 1, there are dozens of songs with cheesy keyboards, bad beats, and cranky guitar solos.

Hitting stores June 7, Donso's self-titled album hits the sweet spot in subtly adding beats and loops to what clearly remains African music. The song "Hunters," for example, layers on drums and keyboards but they never obscure the ngoni riffs at the heart of the song. "Mogoya" meanwhile finds a compromise between Afrobeat and traditional West African vocals. Alas, I have no idea what the lyrics (or even the song titles) are about, but that won't stop me from enjoying the great grooves these guys lay down.

Here are a couple of remixes from the album:

You can check out more remix sounds from Donso's remix contest.

Both Comet Records and Donso seem to have a minimalist presence on the Web and I'm not even sure where you can get the CD (help, anyone?), though you can find out more at the links below.