With the final games of the group round tomorrow, I'm delighted to see the field so wide open with lots of surprises still possible. From the drama/controversy of the USA-Slovenia game to the collapse of France and the growing momentum of Argentina, Portugal, and Brazil, I've seen more highlights than lowlights. 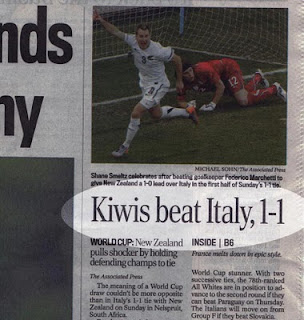 And when I don't have a favorite player or team on the pitch, I'm usually inclined to cheer for the underdog. Notably, Switzerland's tenacious defence in defeating Spain and Serbia's resistance to the German fußball machine. And perhaps best of all, the All Whites of New Zealand scoring early on Italy and limiting the Azuri to one (weakly called) penalty kick for a historic tie. New Zealand, home to only 25 professional footballers, I'm told.

Which makes this newspaper headline both clever and accurate. It was a loss for the Italians, and a win for the Kiwis, more than the scoreline would reflect. And I want to give a shout out to that other land down under today, which may be known for sheep and flightless birds, but also has some great music.
I've written before about Moana Maniapoto, the Black Seeds, Fat Freddie's Drop, Tama Waipara, Wai, Te Vaka, and probably a few other musicians from Aotearoa. Today something different, festive, and fun.

Iwi's self-titled 1999 album -- a NZ Music Awards winner -- is a blend of soul, rap, haka, and reggae all in the Maori language. The song "Whakahokia Mai" is described as "a kick-ass shout out to the youth." Today we'll consider it a kick-ass shout out to the All Whites, and an encouragement for them in their final game against Paraguay. And yes, if the Kiwis win, they have a good chance of advancing to the knock-out rounds.

i'm from italy but i totally agree with you! we've been beated, our team this year is the worst italian soccer team i've ever seen! :(