It takes a certain amount of obstinate optimism to keep publishing a blog devoted to a small slice of the music pie, appreciated by only a small slice of the listening public. But apparently I'm an obstinate optimist, 'cause SoundRoots will be celebrating its 5th birthday this August. Five years, and nearly 900 posts on global and roots music, culture, dance, festivals, radio, travel. And yes, soccer. Or football, futball, fußball, or whatever you call it where you are.

I've posted about the world cup, talked about it on the air, and played music related to the competition. But today, a first for SoundRoots: a glimpse into the future. Due to a certain relationship between SoundRoots and the Mud Bay Tiki Lounge (and a few well-greased palms), I was able to obtain the use of the Wayback Machine for a couple of hours last week. Ordinarily, it is used for the relatively mundane work of taking visitors less than 12 hours into the past, giving listeners to the Cover The Earth radio show a chance to be at the MBTL at midnight the previous evening for their special headliner.

But using some DIY instructions I found in the Internet, I was able to tweak the settings and go a month into the future. Well, a future. A possible future. A future in which the home-continent advantage (perhaps the hypnotic quality of 20,000 vuvuzelas...) wreaked havoc on ordinarily dependable teams. A future that does not include an African champion, alas, but does include a delightful all-Africa third-place match.

I'm compiling soccer/football-related songs to share on Spin The Globe this week and perhaps as a World Cup mix...watch this space.

But onto the results of our Wayback Machine (Wayforward Machine?) adventure. I won't include the actual scores, to maintain some degree of surprise. And I can't help thinking that North Korea might just find a way to change this possible future and do better than expected, emerging from the group stage with their defensive/counterattack prowess. Anyway, herewith I present to you the results of the 2010 World Cup: 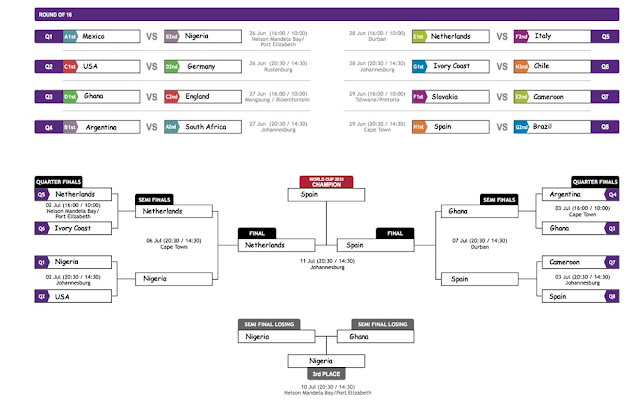 P.S. If you win loads of cash betting on the winners revealed here, feel free to share.

Brazil will certainly win some games, but this won't be the year for their sixth title, no. Sorry, Anonymous...