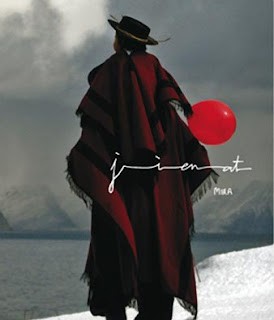 Largely the work of Norwegian musician Andreas Flifet, Mira focuses on rhythms and voice with lyrics often sung in endangered languages shared by only a handful of people. But don't make the mistake of thinking that only a hard-core ethnomusicologist will love this album. Mira has quickly vaulted onto my "best releases of 2010" list.

The album is engaging from the start, kicking off with "Sissel," on which Flifet's multitrack joik chant over percussion by Fredrik Gille. Flifet explains that the song emerged from his "sport" of "cornering innocent bystanders and taking orders for custom-made tunes. Sissel wanted a dance/joik/Latin mix, which she got!"

The title track is about a dog found by a reindeer herder complete with barking so convincing it annoyed my sleeping cat. The album also includes a birthday tune for Flifet's mother, a pair of songs for young brothers Fredrik Albert and August Samuel, and a Norway-meets-West Africa piece featuring balafon by Adama Conde.

The album hews to a traditional aesthetic with acoustic instruments only and no effects apart from reverb, though the compositions shine through as modern and engaging in a way pure traditional songs often are not. I've long been a fan of joiking, the traditional Sami form of singing that's similar to Native American chanting, though with a unique vocal timbre that must be heard to be understood.

Artists such as Vilddas and Ulla Pirttijarvi have combined joiking with contemporary sounds, but no one has updated it so sincerely and acoustically as Jienat. And then there's the big Brazilian percussion blast of samba group Swing do Pelo on "Gille," recorded live on the streets of Pelourinho, combined with Flifet's vocals in Inari Sami, a language with only a few hundred remaining fluent speakers.

The album is noteworthy for a few aspects beyond the great music. Along with the music CD, you get great liner notes (lacking only any detail on specific percussion instruments) and a Blu-ray disc that, alas, points out how SoundRoots' technology is not quite cutting edge (it would play neither on my computer nor in my DVD player). Fortunately the music alone is enough to keep me curiously entertained while I seek out the suitable technology. Highly recommended!

Nice song, something really different! I played it for our dog, and she waggled her tail in approval ;-)