Monday's mp3: The Missing Link from Ethiopia to Israel

Jewish hip-hop isn't exactly a new phenomenon... I'm thinking of Socalled, eprhyme, Hip Hop Hoodios, even the comedy of 2 Live Jews. Even if you're familiar with those artists, Axum brings something new to the table. You may have noticed Axum atop SoundRoots' August Top 10, and for good reason. Bringing their Ethiopian roots to Israeli hip-hop culture, Judah (Gilor Yehuda) and Tedross (Reuben Aragai), from the coastal Israeli city of Netanya, create a compelling blend of new energy and traditional sounds. 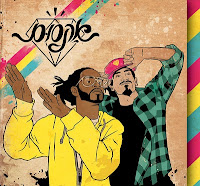 A little background from our friends at JDub Records:


Tedross was one of the first Ethiopian-Israelis to be born in the State of Israel, his family emigrating from Ethiopia in 1980, while his mother was pregnant with him. The family struggled with language and financial problems and moved from town to town until they finally settled in Netanya when Tedross was 13. Judah on the other hand was born in Netanya and raised in poverty, ultimately moving out on his own when he was only 16 to try and make it. The duo met each other as teenagers hanging out on the streets of Netanya and each schooled the other on their own musical traditions and backgrounds. From that moment on they were inseparable, giving their full attention to their mutual love of music, and using it to advance themselves out of Netanya to Tel Aviv and better lives.

Does their experience translate for listeners who don't speak the language? "When you hear a song and it makes you feel something, you don’t have to understand a word," says Tedross.

The group is named for the Ethiopian city in which the Ark of the Covenant is said to be held in a well-guarded treasury near the Church of Our Lady Mary of Zion.

And while you might expect an Israeli hip-hop group to be steeped in politics, in fact the duo write more about the everyday challenges of immigrant urban life. Or so I'm told; I don't understand the words, but I have much respect for the melodic rapidfire delivery and consistently engaging arrangements. Axum avoids aping popular Western hip-hop, though it dips into that genre as well as dancehall and reggae (check out the slow soulful "Laba Hama").

But it's their energetic tunes that get me fired up, particularly when they incorporate traditional sounds such as oud, dumbek, and Arabic orchestral strings. All three are evident in "Knowa," one of my favorite tracks and perhaps the musical missing link between Ethiopia and Israel. But I'm going to give you something with less Jamaica but more Middle East. Indeed, "Hakshivu Na (Listen Please)" sounds like something done in cooperation with Israeli surf-rock band Boom Pam -- just check out that guitar. I'm pretty confident that we'll be hearing a lot more from Axum following this groundbreaking US debut recording.