Monday's mp3: Listening to the Banned 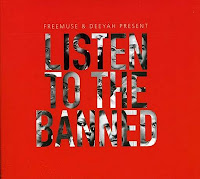 Not long ago, I was writing about music banned in Zimbabwe. Like slavery and poverty and violence and fossil fuels, the suppression of "objectionable" songs and artists seems like something we should have transcended long ago. But it's not yet so.

To appreciate the widespread nature of the problem, you need look no farther than a wonderful new compilation called Listen to the Banned. The album is presented by Freemuse, an organization promoting freedom of expression worldwide for musicians and composers, and Deeyah, a Pakistani singer, composer,  filmmaker, and activist.

Like the best for-a-good-cause compilations, you can listen to Banned not out of guilt, but because it's got some fantastic music. You'll likely recognize a number of included artists, such as Persian singer Mahsa Vahdat, Lebanese oud player Marcel Khalife, Zimbabwean singer Chiwoniso Maraire, Ivory Coast reggae star Tiken Jah Fakoly, and Western Saharan singer Aziza Brahim.

The less famous include:
Here's Darya's contribution to this compilation:

[mp3] Farhad Darya: Arooss-e-Aftaw
from the album Listen to the Banned

You can read more of the artists' stories and see videos of some of them here. Here's the full tracklist:

If you love global music, you should be concerned about the trend of banning music. It happens worldwide for a variety of reasons, many of which are documented at Freemusepedia. There's a lot of music out there that I don't like, and that I even think may be damaging or dangerous. I choose to ignore it rather than call attention to it by trying to get it banned from schools or libraries or concert venues. Until governments and terrorists do the same, we need compilations like this and organizations like Freemuse to remind us about these artists on the front lines.