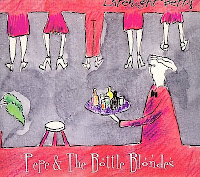 I've had few close encounters with monkeys. Here in the USA a monkey peed on me once. In Malaysia one tried to steal my shades. And in India, I was involved in an elaborate scheme to recover a friend's camera from a monkey by offering a ransom of crackers. (The camera was returned unharmed, but the camera-knapper eluded justice).

As far as I know, none of those monkeys has had a song written about them. Nor do they deserve one. But many monkeys do deserve this honor, it seems. So many that I'm putting together a future episode of Spin The Globe on the very theme of songs about monkeys, from anonymous simians to Hanuman. And in doing the research for that show, I rediscovered some great music. You'll have to wait to see the full playlist, but here's one song to whet your appetite.

Pepe & the Bottle Blondes are (or were -- I can't find any current info on them) a Portland, Oregon troupe playing campy Latin-flavored tunes with a quirky twist. Their website lists a 2005 album called Pambrosia, which I haven't heard. But since digging their earlier album out of my archives, I've listened a half-dozen times, and I've yet to grow tired of their tight arrangements and great sense of humor.

Listen for this track about Vicente and Juanita Lupe, and let it serve as a lesson to all you young monkeys out there who are rushing into a relationship.

The Pepe in question here is one Pepe Raphael, a Madrid-born singer with a rap sheet that includes ballet and musical theater who has also appeared on albums by the similar group Pink Martini. Pepe -- if you're still out there making music, give me a holler and let me know what you're up to!

By the way, I do realize that this is actually Tuesday's mp3. I have no excuse except that I was busy with, um, special projects over the past few days. And there was a wind storm and the power went off. But I'll make it up to you; I have a bunch of new sounds to share soon. Stay tuned.