Talking about the Banned

Quick reminder that you can hear a live interview with Deeyah tomorrow on Spin The Globe, discussing the new compilation Listen to the Banned. You may have read about the album a couple weeks ago here at SoundRoots. Here's a bit more about Deeyah: 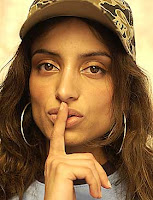 Born and raised in Oslo, Norway, to Muslim immigrant parents (her mother is Pashtun of Afghan ancestry and her father is Pakistani), Deeyah immersed in music from an early age. Trained within the North Indian/Pakistani classical vocal tradition for more than fourteen years she had the rare privilege of being the only female ever to be trained by Ustad Fateh Ali Khan.

In her native Norway, Deeyah has released three critically acclaimed albums under her birth name Deepika. From an early age Deeyah's unique musical abilities captured the attention of world renowned musicians, artists as well as legendary music industry veterans. This appreciation has given her the opportunity to collaborate with such greats as her teachers Ustad Fateh Ali Khan, Jan Garbarek, Andy Summer, David Lindley and Knut Reiersrud.

As impressive as her musical accomplishments are, a dark shadow has always followed her from the very beginning of her career. Being from a Muslim family and having chosen music as her profession, Deeyah has had to dodge bullets of criticism her whole life. After years of suffering in silence, having to endure constant intimidation, physical threats and even being attacked at one of her own concerts as well as a failed abduction attempt from her school grounds, Deeyah left Norway in 1996 for the UK. When the symptoms of the same problem she had fled from in Norway resurfaced in the UK in early 2005, Deeyah once again packed her bags and left for the safety of the United States.

Tired of running and protecting the image of conservative segments within her community, Deeyah finally made the first step towards reclaiming her life. Out of the years of anger, sadness and frustration, her most controversial song and video to date 'What Will It Be?' was born. Despite the continuous abuse and death threats, Deeyah remains defiant against prejudice and discrimination on all levels - especially towards women.

She stopped performing in 2006. Deeyah now devotes the majority of her time to promote human rights and freedom of expression through a range of self started initiatives and creative outlets.

In 2009 she was awarded with the international "Freedom to Create Prize" alongside Cont Mhlanga, The Zimbabwean playwright and Belarus Free Theatre.
(source: listentothebanned.com)


The interview on Spin The Globe will start at around 10:20 a.m. Pacific time. If you can't catch it live via broadcast or webstream, you can catch the show's audio archive for a limited time.

Email ThisBlogThis!Share to TwitterShare to FacebookShare to Pinterest
Labels: censorship, deeyah, listen to the banned