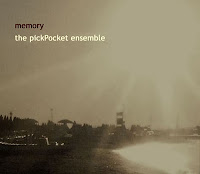 I've got a longstanding gripe with restaurants and music. In my perfect world, a restaurant's music should help reinforce its identity, particularly if it's an ethnic place. It irks me to eat Vietnamese food to the sounds of Rihanna, or Mexican food to James Taylor. I have a new favorite Thai place in town simply because along with great food they offer Thai music in the background. I don't know the songs, but they help the atmosphere.

Of course many establishments don't have a specific identity, or even celebrate a diversity of cultures in their foods. And for them, music from the pickPocket Ensemble could be part of a perfect soundtrack. PE describes itself as a "contemporary world chamber music" group, a description that does justice to their softly swinging acoustic sound. It comes from nowhere in particular, while sounding familiar enough to be engaging. Says PE founder Rick Corrigan:

Café music is almost like the inversion of folk. Folk music is something deep and particular to a region or people. Café music is just opposite: We come from all the places we come from and meet in the middle. ... You’d go into a record store and in the "world music" section everything used to be Balkanized—excuse the phrase—into countries: Greece, France, Turkey. But most musicians don’t think that way. They mix with anyone whom they can communicate with, which is why we like to talk about café music. It’s not about nations; it’s about intimacy, about just you and me, interacting face to face.

This intimacy shines through on their soft-spoken album -- or rather, soft-played, since it's all instrumental. Some may balk at paying full price for a surprisingly short album; it's just over 28 minutes long. But this charming daydream of a global album has a definite charm for fans of great instrumental music. And it may be a needed balm in a world of ever-louder music (and politics). Corrigan again:


We invoke a world where people gather in close together, and the acoustic quality enhances that. One fan told me our music brought her back to a place of slow conversation that she’d never known and that she missed. That’s what we’re trying to do.