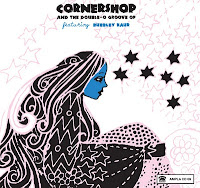 Devoted SoundRoots readers will know that I appreciate most attempts at cross-cultural musical fertilization. Just look through the archives; the examples are too numerous to count. Still, each time I face the ocean of multicultural mashups, I stick a toe in warily, for the waters are frequently treacherous.

The arrival of Cornershop's new album Cornershop & the Double 'O' Groove Of found me in such a wary move. A plus is the vocals of Bubbley Kaur, a Punjabi singer whose reedy voice is up there in the range of Bollywood playback singers. A minus that becomes quickly apparent is that the album tries to evoke bhangra without dhol drums, instead using drumkit/programmed beats that just don't have the same juice.

That said, this really isn't trying to be a bhangra album, and I know I need to allow some slack for the whole cross-cultural blend thing. So let's move to the bright side: Cornershop has created an energetic album full of catchy tunes here. And there's an odd variety, from the distinctly bhangra-flavored "United Provinces of India," to the offkilter military-march of "Natch," to the funky bass-driven "Double Digit."

Though the album doesn't adhere to any one sound, it's consistent in pasting Kaur's voice over rhythm-heavy tracks. This could be both its appeal and its downfall. While I like all the tracks, I also haven't been able to listen to the album all the way through. I'd call it a collection of catchy singles that doesn't hold together as a whole album. But mix it up with other random tracks on your iPod, and you'll love it.

For more on this go to www.latest.fm/MUSIc/index.asp .

I am using this link for most of my needs

FYI, latest.fm has nothing particular to do with Cornershop, but they do seem to offer a wide variety of Indian/Punjabi music for streaming and apparently (with registration) for downloading. It's worth checking out.