Sometimes I wish I lived on the other coast. Not for the piles of gray snow and sub-freezing temperatures and odd aromas emanating from the subway platforms, but -- of course -- for the music and culture. I've only recently been introduced to the music of Mexican singer Nuriya, but her debut CD Tanita jumped easily onto the February Top 10 chart. Next Saturday, she's having a CD release party at Joe's Pub in New York, and I won't be there. 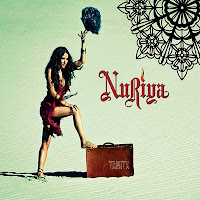 I may well be here on the west coast listening to her music, however. While she's from Mexico, you wouldn't know it from the Arabic-flamenco flavor of her music. Think Natacha Atlas meets Ojos de Brujo, with a Gypsy horn section tossed in to keep things interesting. This style of music from her own cross-cultural past. In Nuriya's own words:


I come from a family of Middle-Eastern Jews who fled their countries, Iraq and Syria, due to religious persecution. All of them were bound for the US. However the majority ended up being re-routed and sent to Mexico as US immigrant quotas were filled upon their arrival.


I was born in Mexico City where I spent a portion of my childhood.  Thanks to my mother, who was studying in conservatory at the time, my most formative years were abundant with music - Middle-Eastern, Mexican, South American, Caribbean, Flamenco, African, and Classical music. It was the music during this earliest phase of childhood that would determine how my soul would communicate for the rest of my life.  The elders also made their mark by their perpetual playing of old Arabic records and singing of Pismonim (prayers sung to melodies of secular Middle-Eastern music) at family gatherings.   In our homes this vivacious way of life in the Middle-Eastern and the Latin cultures became effortlessly intertwined.  It was apparent in the music we listened to - my enchantment lay in the melismas of Oum Kalthoum or Augustin Lara, and also in the food we ate: tacos con hummus/tahineh among others.  And so it was with these sounds, colors, and flavors taking root in my being, that I approached my early music and dance studies.  No matter what I learned - I carried those elements inside.


The sounds within me and my curiosity have taken me all over the world to learn and play music.  David Oquendo, a long time teacher and friend, sent me to Cuba to study folkloric Afro-Cuban music and dance with the Muñequitos of Matanzas.  In Israel with my cousin, Yair Dalal, I studied the Hebrew and Arabic melodies that have inspired some of those heard half way across the globe in Afro-Cuban music.  Further enriched with these experiences, I went on to Paris to compose and tour Europe.


This gypsy existence, gleaning what moves me most from everywhere I go, is what emerges in my music and movement.  It is what has inspired my album "Tanita" - Little Gypsy.  Here, I have put into sound and words, the journeys, the colors, and revelations that are my experience. The music is a collection of the sounds that most resonate within my being and inspire my soul to sing - they are the sounds of my Middle-Eastern and Latin heritage.   The album traces my quest for my personal musical truth - around the world and within my heart.

With this background in mind, Nuriya's music really speaks for itself. Check out this horn driven track, and the video below in which Nuriya explans how tacos con tahini explains the flavor of her music.

Nuria will be touring this summer; perhaps she'll visit us here on the left coast. We can hope, yes?