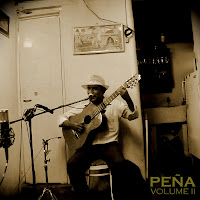 First came the confusion. Then the delight. Then the surprise.

Let's start at the beginning, with

THE CONFUSION: The first CD came in unique packaging: a wooden box containing a CD, a DVD, and some notes. Wrapping the box is a little sash of paper with the song listings on the back, and just one word on the front: PEÑA. So... is Peña a person? A band? The name of a compilation? I've listened a bunch of times, and I'm still not sure. But that's not important now, since the confusion was replaced by

THE DELIGHT: It's the music. Simple, but so often forgotten in this age of technological wonders and editing capabilities. Minneapolis-based guitarist Cory Wong and his Secret Stash label got this part right, when he traveled to Peru. His goal? To help broaden appreciation for Afro-Peruvian music. His method? "The way to make a great recording is to place a microphone in front of a great musician and get out of the way." Though the recordings were done on the fly in locations ranging from classrooms to a hostel to a balcony, the sound is crisp and clean, and the performers are great. Wong plays guitar on most tracks, but shining brightest are the Peruvian musicians, including Chico Chavez, Hugo Alcazar, Javier Choy, and Paloma Godoy. Acoustic, guitar-centered, cajon-accented goodness. I played tracks on the radio, spreading the word about this wonderful CD. Then came

THE SURPRISE: Only about four months after the first album comes Peña Volume 2. Having been involved in recording projects, I know how much work goes into producing a CD. To do two so quickly? Impressive. And the second disk is just as engaging as the first. Wong says the intention all along was to have two CDs of selections from the 50+ songs recorded in Peru, and that they were released separately so that "each track is likely to get a bit more attention from people once they dive into both volumes."

Have a listen to the opening track, featuring Sofia Rei Koutsovitis on vocals, Eric Kurimski on guitar, Jorge Roeder on bass, and Jorge "Coqui" Oerez-Albela on percussion.

Oh, and in the end I think I'll just think of Peña as a musical collective. And hope for a Volume 3 sometime....