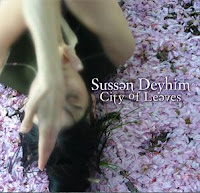 There's an earnestness in Sussan Deyhim's arrangements and vocals that's so aggressive, so demanding, that some listeners may write her music off as a variant of Bjork, Shiela Chandra or even Laurie Anderson. And that would be a tragic mistake, for while there are passing similarities, Deyhim's music is unique, and stunning. It's deeply rooted in her tradition (Persian), while branching into very modern, explorative styles.

This was true in her Sufi-infused album Madmen of God, and it's no less true in her new album City of Leaves, which Deyhim says "derives from my love for many brilliant vocal traditions of the East and the West, from the old to the new, from young to not so, from intuitive to deeply pensive, for the monk and the punk."

While vocal-centered, there's plenty of rhythm and melody in the accompanying instruments, thanks to cohorts including DJ Spooky, Bill Laswell, Richard Horowitz, and others. The rich arrangements may have echoes of Deyhim's previous life as a dancer with Iran's national ballet company, as well as her long residency in the USA. She clearly loves traditional music without feeling constrained to repeat it. Indeed, in her liner notes she says:

[I] have a few questions for traditionalists which hold culture hostage to heavy-handed gate-keeping as opposed to tradition lovers, although I do understand the 'romance' attached to keeping the traditions as intact as possible. ... What we hear as musicians is sometimes referential to a tradition, but one hopes to stay open to the vast, mysterious, sublime and subliminal language of the sonic universe.

Here's a peek into the universe of Deyhim, whose progressive Persian music could be the soundtrack for a region -- from her native Iran spanning across the Middle East and North Africa to Libya and Tunesia -- yearning for their own voice:

[mp3] Sussan Deyhim: Dukebox
from the album City of Leaves