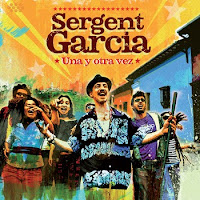 Way back when, as I plunged ever-deeper into the world of global music by starting a radio show and a blog, one of the albums in frequent rotation was Sargent Garcia's Un Poquito Quema'o. He dropped off my radar after that, and hasn't released a new album for more than a decade...but that's about to change.

The Sergent (no, he hasn't got a promotion in the past decade) returns with an album called Una y Otra Vez, out on Cumbancha "in the first half of 2011." I'll tell you more when I hear something, but here's what the label has to say about the new project:

The new album, which is still in production, was recorded largely in  Colombia and features a number of guest artists from that country's  thriving music scene. Liliana Saumet from the electro tropical band Bomba Estereo makes an appearance, as does Erika Munõz, the lead singer for Sidestepper and many others. Cumbancha founder Jacob Edgar was just in Paris to sign the contracts and celebrate with the band over many glasses of Cuban rum and a box of Cuban cigars.

As a teaser, Cumbancha has released the track "Mi Son Mi Friend" as a free download. Here 'tis:


Fun factoid: Sergent Garcia's name was inspired by a character regularly ridiculed by Zorro (thanks, wikipedia!)