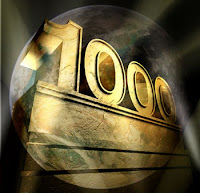 Dear Reader: Today is an historic occasion. Really. And that means gifts for you.

You see, this marks post number 1000 on SoundRoots. A thousand posts since first going live on 16 September 2005. It's a little mind-boggling, and the site has grown and changed much since those days.

So yeah, this is historic. Though I may have deceived you with that headline. More on that in a moment. For now, know that the first belated hints of spring-like weather are having deep effects on me. There is of course the irresistible desire to spend more time outdoors. There's also the desire to clean up and simplify, which is where you come in.

Every day I receive emails, pick up packages, and bookmark pages, all with potential material to write about. And there are far more than I can reasonably cover here, which leaves me with quite the backlog. So I'm going to clear things out, meaning you should click every link in this post to find free mp3s of global sounds. Every link will lead to music, or to somewhere to get free music. (Those two you just passed by link to songs by Swedish group Vasen, by the way.)

Also, I may give away some CDs in coming posts. Stick around to see if that happens. I'm curious myself... Speaking of giving away music, La Troba Kung-fu is doing just that, with free downloads of two albums and a remix collection here. A bit farther east, Ukrainian group Haydamaky gives you the free track "Efir" from their 2008 album Kobzar.

Whoops that last one was a link to the a site selling the album. Oh, well, tough it out. Most links lead to free mp3s.

Let's point the compass west to Cologne, where a fellow named Shareholder Tom makes danceable beats. He's got a new album out of club mixes, but I much prefer his Afrobeat "Stopover Abeokuta." Also linking Europe and Africa is the "official anthem of the Serbian World Cup squad" from 2010 -- a song called "Kings of Africa" by Filip Filipi, Tough Life, and Borussia Dortmund and national team defender Neven Subotic(!). The Czech group Yellow Sisters have no direct link to Africa that I know of, but I love their harmonized voices as on the track "Tubab Woman" -- and I encourage you to further explore the Indies Scope website, as they offer one free mp3 track from most/all of their releases.

Just up the road from here is Vancouver, Canada -- home of label Chiwalla's Boombox and its raft of great Asian sounds, like San-Francisco-based Janaka Selekta, who give us the song "Reborn." Vancouver is also home to Indo-Irish partiers Delhi 2 Dublin, who are sending you an "S.O.S." and clubbing with "Tommy (sonicanimation Remix)"; D2D member Tarun has a new album out hisself, and wants to give you some "Apples (Spoonful of Suga remix feat. Fup Sidhu)".

In 2010, Brazilian icon Tom Ze released a CD and a vinyl box set. The song "Bahia De Caymmi" comes from one of those, though I'm not sure which. From Peru (via US producer Cory Wong) we have the Peña songs "Cardo O Ceniza" "Quezas Un Dia Asi (feat. Gloria 'La Nina' Rivera)" and "Cuando Llora Mu Guitarra" and "El Mayoral"; Argentine artist Tremor sings, just for you, "Viajante"; Jamaican drum legend Larry McDonald is "Head Over Heels"; Toubab Krewe do a feisty live "Autorail"; When is the time? Louie Ramirez answers in hot salsa fashion on "Ahora Es El Tiempo"; Forro in the Dark get all "Nonsensical"; Latin-electro group Empresarios get down on "Pereo Intenso"; from a double-disc Fania retrospective, Justo Betancourt sings "Pa' Bravo Yo"; from another retro Fania collection called Africa Caribe, Mongo Santamaria gives us "Mambo Mongo (Joe Claussell remix)".

From Africa, we've got "Bon Koum" by Sidi Toure; Khaira Arby with her buddies The Sway Machinery singing "Gawad Tariamou";  "Poye (Tal M. Klein Remix Radio Edit)" from Mali's Issa Bagayogo (honestly not as fun as his album tracks...); is it ironic that the latest free mp3 from gone-but-not-forgotten Afrobeat originator Fela Kuti is his song "Zombie"?; Ebo Taylor also sings about "Life and Death"; if you're into African disco, dance to Bibi Tanga doing "Be Africa (Sitek & Wix Remix)".

It's becoming common for bands to give away a track from new releases in exchange for you signing up for their email list. Seems a fair exchange, since you can always un-subscribe (or use a disposable email). Here are links to some such deals: "Lero-Lero" and "Lero-Lero (DJ Tudo remix)" by Luisa Maita; "Iñez" by Chris Velan (who, I think, listens to lots of Paul Simon) feat. Sierra Leone's Refugee All Stars; "Pate Pate Radio Remix" by Te Vaka; Ozomatli was part of a get-out-the-vote push last fall, and apparently you can still nap their song "Respeto".

Finally, in this age of wars, nuclear disaster, and polarized politics, I join Ebo Taylor in wishing for "Peace on Earth."

Are we up to 1000 links yet? Perhaps not, but it's enough to keep you busy as I start on the next thousand posts. Thanks for reading, and remember that donations to keep SoundRoots growing are always welcome. Just click the "Donate" button to contribute any amount securely via PayPal.

And thanks for helping me with my spring cleaning.