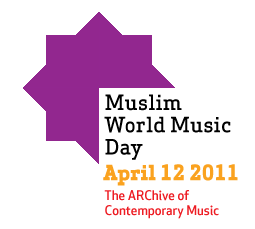 Just found out about this, but since it's such a SoundRoots-ish endeavor, I want to share it with you before the day is gone. Turns out today is "Muslim World Music Day," at least according to The ARChive of Contemporary Music.

Check out the website www.muslimworldmusicday.com and you'll know as much as I do about this. You'll find there a database of Muslim music and where you can find it (websites, record labels) though it is not available on the site. They also have set up a Youtube channel where you can watch/listen to many Muslim music performances. And they list a number of performances, lectures, and other events around the world celebrating the day.

I know...you have a question about this whole concept. Well, the Archive addresses this question so I don't have to:

Muslim World Music Day is a cultural project. Centuries of music making in the established traditions of the Muslim world have produced shared musical vocabularies. Muslim musicians have also embraced other genres, from jazz to hiphop to hard rock, to express their faith. Today, Muslims from a range of theological perspectives continue to debate the place of music in Islam, while musicians around the world—Muslim and non-Muslim alike—draw inspiration from old traditions and invent new ones. The definition of “Muslim music” will always be changing.

We seek to provide an inclusive overview of this music from a variety of perspectives. We hope the very act of collecting, discussing, and listening to the music gives rise to new answers to the question, “what is Muslim music?”

Kind of like the old debate over the term "world music." Explore, ruminate, and comment below with your thoughts on "Muslim music." And enjoy this video about the "Queens of Islam," which at once celebrates and challenges Muslim tradition.