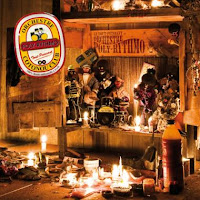 So many comeback stories and decades-old reissues have come SoundRoots' way of late we're inclined to yawn and wonder where the new music is. Not that some of these releases aren't great, but it seems to be getting downright trendy to dig through the archives with an eye toward reissue or resuscitation.

I'm pleased to report that the new CD from Benin's Orchestre Poly-Rythmo will chase away any skepticism. This isn't the world-music equivalent of Duran Duran making the casino circuit; Poly-Rhythmo's grooves are fresh and energetic even 20 years after their last album. The album is a winner for fans of funky highlife and Afrobeat, and it certainly doesn't hurt that they've included some high-profile guest artists, such as Angelique Kidjo on the band's biggest hit "Gbeti Madjiro."

The Latin influence frequently encountered in African music inspired the piano work on "Koumi Dédé," along with the song's killer bass line and wah-wah guitar riffs. And even for those of us who don't understand the words, songs such as "Pardon" are aflame with the kind of Afrobeat energy that turns polite fans into writhing moshpits. The whole album is full of such feisty diversity, and undoubtedly will win many new fans for a band some call "West Africa's best-kept secret."

The 10-piece band (including five original members) recorded the new album in Paris, and are currently touring in Europe, with more stops planned in the USA and Brazil.