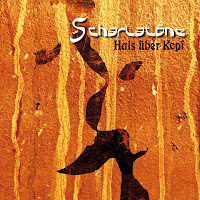 Every once in a great while, even the most widely traveled ear is surprised. Today I introduce you to a band and an album that stretches the possibilities of the human voice, while being hugely entertaining more than tolerably experimental.

Scharlatöne is a trio -- Markus Michael Riccabona, Christian Recklies, and Robert Polsterer -- who have just released an album called Hals über Kopf, which loosely translates as "head over heels." You may remember Polsterer from a previous SoundRoots post on his Umnachter Project album. This new project sounds similar, though on this album all instrument sounds are made by the human voice alone.* While you could call it an a cappella album, it doesn't sound like any a cappella album you've ever heard (though the Hungarian group Zuboly comes close). 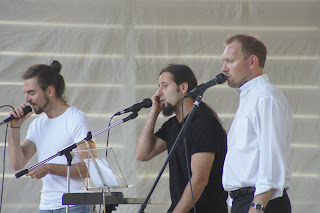 It's challenging conveying the sound of an album without instruments and without words. The vocal sounds include (often simultaneously) driving beats, sacred-sounding chants, buzzes, yodeling, flutish overtones, and other elements even more difficult to describe. Which is why I'm so glad to include this song for you to check out.

The band's name comes from a play on the Italian word for "talk," and their website says they aim "to tell the stories that want to kidnap naughty and cheeky music in a fine fabric texture."  Take a break, dear reader, from socially conscious reggae and the real-life lyrics of refugees and immigrants, and bathe yourself in the pure, amazing sounds of the human voice.

*This is what they say, though both a band photo and a listen to the track "Lotos & Edelweiß" confirm that jaw harps enter the equation. That's only cheating a little.