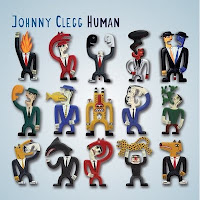 The most remarkable thing about Johnny Clegg isn't that he's still making music 111 years after his emergence as an antiwar musician during the Second Anglo-Boer War. Or that it's apparent from his website photo that he's had his eyes surgically removed. No, it's that he's only just learning how to end songs. The majority of the tunes on his newest album, Human, still end with long fade-outs, but it's worth noting that several songs actually come to an end without the engineer having to touch a knob.

I like Clegg's music, and I like that he was leading interracial bands in South Africa and mixing Western pop and township jive long before such fusions were cool ... or even legal. And I like several of the tracks on this new effort, particularly "Congo" and "Magumede." He has the usual blend of political and personal (read: love) songs, much like a southern hemisphere Bruce Cockburn. But several tracks leave me flat, and I'm a little concerned that the lack of sparkle may reflect a fade-out for this groundbreaking musician. Diehard Clegg fans will certainly enjoy this album; the less devoted may find it a bit uneven and unsatisfying.

Clegg is finishing a USA tour at present. Remaining dates:

Obviously the writer of this review doesn't know much about music. The recent Clegg tour was totally sold out and new CD has received rave reviews the world over. I saw the show in Denver, where he performed half the songs on the new CD. I was not a fan until I heard the new music, which is really well writter and performed.