I love me. Though now that Oprah's off the air, I know I'll need a little boost now and then to remind me of how much I love me. Fortunately, I've got my stereo loaded with Putumayo's new compilation Rumba, Mambo, Cha Cha Chá. Music that, as a friend put it, makes you want to flirt with yourself.


On Rumba, Mambo, Cha Cha Chá, Putumayo explores retro-flavored Latin dance music with these timeless genres from the Cuban family tree. Rumba, mambo and cha cha chá are familiar names to ballroom dancers the world over. Originating in  Cuba from a blend of African and European influences, they have become  immensely popular around the globe. On this album, Putumayo has  collected songs that demonstrate the universal appeal of these musical  styles, with informative liner notes in English and Spanish accompanying the CD.

Marseille-based Conjunto Massalia opens the album with "Guajira y Chachacha," a song about the birth of these two related genres. Cuban group Tradicuba’s "Potpourri de Cha Cha Cha" is a medley of some of the most memorable cha cha chá's in the history of this venerable style. Internationally celebrated  Colombian band Fruko y Sus Tesos, whose Latin dance  tunes are popular with salsa DJs around the globe, offer their own spin  on a classic of the mambo repertoire, "Mambo #5." Salsa Celtica adds Celtic flavors to son and rumba rhythms on "Esperanza." 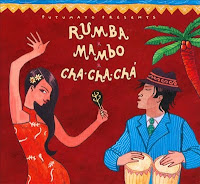 That this music has spread globally is attested by the origins of the included artists: Cuba, yes, also France, Colombia, Scotland, the USA, Belgium, and Russia. The whole compilation makes me nostalgic for a time I never knew, for dancing in a sweaty but polite hall on a palm-lined street as the sun sets across a sandy beach. Put on this track, and have a dance with yourself. You'll hardly miss Oprah at all.