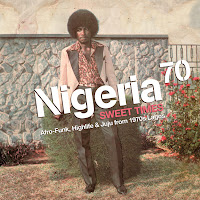 If you've been holed up in an elaborately guarded complex someplace, you might not have run across the Nigeria 70 series of releases from Strut. It started with Nigeria 70: The Definitive Story of 1970's Funky Lagos in 2001; then Nigeria 70: Lagos Jump: Original Heavyweight Afrobeat Highlige & Afro-Funk in 2008. Next week, the third installment arrives, entitled Nigeria 70: Sweet Times: Afro Funk, Highlife And Juju From 1970s Lagos.

Like its siblings, this compilation is packed with little-known artist making a big, funky sound. Here's a sample track. The liner notes say:

Often going by the unlikely acronym of ‘D.I.E’, this trio constructed their confusing moniker from each member’s surname. Don Kemoah, Isaac Olasugba and Ezekiel Hart were all graduates of Koola Lobitas, the infamous highlife/jazz fusion outfit founded in the late 1950s in London by Fela Kuti. By the time he had hit upon the formula for Afrobeat, D.I.E. had released the first of three Nigerian singles during the early 1970s before emigrating to Italy. ‘Ire’ is a highlife-inspired track with a juju feel and the title means ‘blessing’ in Yoruba. The lyrics concern friendship and the need to do good: “We shouldn’t fight or we’ll end up in prison.”


[note: There was a mixup and we initially posted the wrong info with this track. The name and track notes have now been corrected.]
More:
Listen / buy CD
Sweet Times website
Video preview of CD

Personally I like going places where I don't speak the language, don't know anybody, don't know my way around and don't have any delusions that I'm in control. Disoriented, even frightened, I feel alive, awake in ways I never am at home. Cheap Flights to Lagos