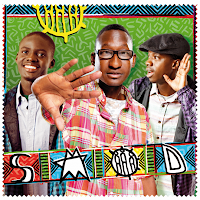 As you might imagine, when I heard that Manu Chao had produced a new album by a Malian acoustic-rap trio, my curiosity was aroused. Chao has previously produced an album by Malians Amadou & Mariam, so he's not stranger to the West African country's popular music.

Being completely unfamiliar with Smod, I wondered if the sound might resemble other West African rap, like Positive Back Soul, or JJC & 419 Squad, or even like Somalian rapper K'Naan. But really, no, it doesn't.

What you get with Smod is an album of tightly harmonized sung and rapped vocals (in French and Malian tongues) with musical accompaniment that sounds far more Manu Chao than West Africa. Guitar-based, the music includes the little loops and hooks that velcro the songs on Chao's own albums to your brain.

Smod's leader Sam is the son of Amadou &  Mariam, which explains the Manu Chao connection. He and his cohorts Mouzy and Ousco -- and later Dronsky, when Mouzy left for Europe -- composed and rehearsed much of their music on the roof of Amadou & Mariam's home, and Chao recorded some of the album up there with his mobile studio. Though this is their first international release, they recorded their first album Dunia Kuntala in 2002.

On this their third album, the music underlying the trio's vocals doesn't sound particularly African: No djembes or koras or balafons. This music is global in construction, and presumably in appeal. There's enough musical variation and interest to hook the listener who doesn't understand the lyrics, and not surprisingly Ousco confirms that “We talk a lot about politics, about corruption and injustice."

"Hip-hop is rebel music,” Ousco says. “It came along because things weren’t working right. Back in the day, the griot sang the praises of the King, except that the king wasn’t thinking of his people any more. Many people were marginalized and rejected and it was those people who became rappers. They said to the king, ‘Your power may be fine and all that, but there are people dying of hunger. And we who are from the ghetto, we want something better.’"

The music on Smod's first two albums reportedly was more in line with the beat-driven swagger of mainstream Western hip-hop. Their sound changed in 2004 when Sam decided to learn the guitar, and they developed an acoustic style they call "Afro-Rap." It's engaging, and the band's fresh sound will undoubtedly win over many world-music fans (though fewer hip-hop fans, I'm guessing).

If I have a complaint about the album, it's that the hand of Manu Chao is so heavy on the music it leaves me feeling like I'm listening to the band through his ears, not mine. Which makes me wonder what Smod sounds like when he's not around. Perhaps we'll find out when they tour, or get around to a future fourth album. In the meantime, Smod is worth checking out as a new African sound.

I'm a hip hop fan and I think this a very good album with 'Les Dirigeants Africains' perhaps one of my fav tunes of the year. Though a know what you mean about hearing it through Manu Chao's ears a bit like when he did 'Dimanche a Bamako', he definitely has a unique sound of his own. Still a talented producer and capable of bringing in a deserved larger audience to this talented trio.