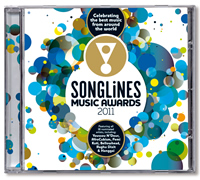 With the passing of other global music awards (and Grammy categories), the Songlines Music Awards may be poised to become the top achievement of global performers. That, along with simply being able to make a living in today's tough music industry.

The winners of the 2011 awards have just been announced, and they are (make your own drum roll noise here):

BEST ARTIST: Femi Kuti
For the album Africa for Africa

I won't argue with their choices. Well, I won't argue much. I think their UK-centricism is showing a bit in the choice of Bellowhead over fellow nominee Terrakota, whose album World Massala has the edge in my opinion.

In case you're wondering who else the winners beat out, here's the list of finalists in each category:

on World Village)
Cheikh Lô (for the album Jamm

on Navigator)
Hanggai (for the album He Who Travels Far

on World Connection)
Lepistö & Lehti (for the album Helsinki

on Aito Records)
Terrakota (for the album World Massala

on Real World)
Raghu Dixit (for the album Raghu Dixit

on Vishal & Shekhar Music)
Syriana (for the album Road to Damascus

You can read more about each winner at the Songlines website. And catch the Songlines podcast for clips of each of the winners. They've even put out a compilation CD with 16 tracks from the nominees, and it's a great lineup