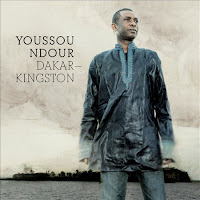 There's no mistaking the direction of the new album from Youssou N'Dour. From the CD title -- Dakar-Kingston -- to the reggae beats, to the opening song "Marley," which is firmly in the griot tradition of praise songs for esteemed elders and persons of influence, N'Dour pays tribute to one of the great lights of global music.

N'Dour, of course, made his name playing a mix of Senegalese mbalax and western pop, but was deeply influenced by reggae from an early age, when he would listen to reggae albums from his uncle's record store. And the example of Marley's influence inspired the young Senegalese singer.

When I started traveling, I started seeing how Bob Marley had affected the world. I saw how someone from an underdeveloped country can become a star, someone who’s really loved. He was my example. I knew looking at Bob Marley that I could do my music from Senegal and touch the world.

There's a strong strain of African reggae, of course, from the likes of Alpha Blondy and Lucky Dube. Like them, N'Dour makes the reggae sound his own, blending West African instruments and singing with reggae rhythms.

For years, people told me that my voice would be perfect for a reggae album. Then one day, I really felt how my songs could get a second chance through reggae. It made sense to me. Reggae gives you more space than mbalax. You have more room to breathe. You know the rhythm and the emotion, exactly what the song is saying to you. It’s very direct at its heart.

These songs will never be mistaken for Jamaican music (which may be a good thing), though N'Dour did enlist some big reggae names to help out, including Earl China Smith (of The Wailers) on guitar, Morgan Heritage, Patrice, and Mutabaruka. The 14 tracks, given a gleaming shine by producer (and former Wailer) Tyrone Downie, are a fantastic blend of two great musical traditions. They may also be a great balm for people bored by standard reggae, or intimidated by complex mbalax.