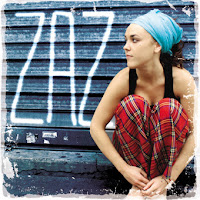 Right then, having offended an entire European nation, on to the music of Zaz, an artist new to me but who apparently has chart-topping appeal in her home nation. I'm sure much of her appeal is lost on my non-Francophile ears, but I am caught by her melodies, and the variety of influences apparent on her self-titled album. There's a fair amount of Gypsy-jazz guitar underlying things, right from the start of "Les Passants." Other tunes sport a pop-music feel, albeit with some clever, fresh horn arrangements as on "La Fée."

Zaz (real name Isabelle Geffroy) has a smoky voice that sets her apart from the light breathy vocals of, say, Camille. Indeed, even to the understanding-impaired, Zaz conveys a weight and seriousness that makes me think of her as someone who tackles serious social issues though her catchy music. Maybe she's the Bob Dylan of France, though for all I know she could be singing about how she never cleans up when her poodle poops in the park.

This track is a departure from the CD's Gypsy-jazz and pop, a stripped down song for guitar and voice, with Zaz singing with a hip-hop vibe before she breaks into a scat. One that doesn't need to be cleaned up.