Las Guitarras De Espana are a Chicago-based group that plays a style of music they describe as "a fusion of Cuban son, rumba, R&B, Latin-jazz, blues, and African percussion with an underlying flamenco music and dance focus." The group just released a new CD called Tantas Cosas,

SoundRoots recently caught up with guitarist Carlo Basile, who kindly answered a few important questions, and several not so important (but nonetheless interesting) questions. 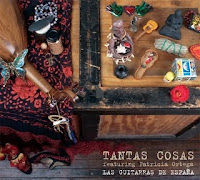 Carlo Basile: Carlo Basile, born in Chicago, full-time musician. Grandparents from Italy (all of them!). Masters Degree in Spanish Classical Guitar. Visited over 30 countries. Taught Spanish guitar workshops in Vietnam, Thailand, Philippines. Been playing guitar for patients in various hospitals for over 10 years.

SR: How long have you been playing/singing, and how did you get started in music? How did this Spanish guitar sound end up in Illinois? How important were your teachers/mentors?

CB: I've been playing guitar for 30 years! Started out playing rock, then R&B, then classical, then "world." There are actually great programs in Spanish classical guitar at Northwestern University, De Paul, and Northeastern Illinois University. My teacher, Anne Waller, studied under the lineage of Andres Segovia from Spain. Anne made me into a musician.

SR: If you weren't a musician, what would you be doing? 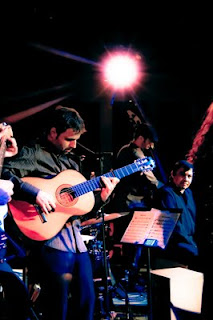 CB: I used to do social work. But I feel like I'm still doing that with music! So, I guess I would go back to "straight" social work if I didn't play music.

CB: I have seen so many great performances. Recently I saw Baaba Maal in NYC. He's an amazing Senegalese performer and singer. I actually know some of his band members. It was an incredibly uplifting show!

SR: In a world wracked by war, corruption, climate change, and poverty, how important is music? Do you think it's important for musicians to address social and political issues?

CB: Yes and no. I think we can make statements about things without being so literal. If you see me performing with musicians from Spain, India,  Africa, Syria, and Bali, then you probably know where I stand on global  issues. I think Bob Marley said a lot of things that made sense to him and the songs were great! I also love Marvin Gaye's "What's going on?" material. But I think most people do not need a literal message to get the point. I also think musicians can sometimes put their message above the music. That's not my thing.

SR: What musician -- living or dead -- would you most love to collaborate with?

CB: John Lennon and then Prince. But I feel both could be a "pain in the ass" to work with!!!


SR: What is your favorite quote/proverb/rumor/guideline about music or creativity?

CB: "Sometimes great tunes or melodies just reveal themselves without much work but with a lot of years of living." That's my quote (sort of)!

SR: What music are you listening to? What are your favorite kinds of music outside of the style(s) you play?

SR: What is your favorite music-drenched movie (and why)?

CB: Pink Floyd, The Wall. Classic at this point.

SR: Describe one of your favorite tracks from the new album.

CB: Cejilla... It's an old "Secret Agent Man" 60's guitar riff played in a Spanish flamenco style. The chords and sections came in a few hours (very quickly). Then I thought about a reggae kind of groove for the middle with a style that I saw Gabriela playing from Rodrigo y Gabriela. I recorded it in Garage Band on my Mac. Patty took the tune and had the melody and lyrics done in a few hours! In some ways, it's one of the strongest pieces on the record.

SR. How can people learn more about your type of music?

CB: There is so much available these days on YouTube. It would have been impossible to see flamenco in Spain just a few years ago with actually going there. Now it's easy. But it also makes you realize how many great unknown artists are out there!

SR: Thanks, Carlo, for the music, and for taking the time to provide a bit of background. All the best with the new album!