What is the sound of Afrobeat when transplanted from the heat and dust of Lagos to the moss and moisture of Seattle? The new group Cascadia '10 has the answer. I'm looking forward to hearing more from them, and catching them live, but in the meantime, they've released a five-song EP for free download. Have a listen! 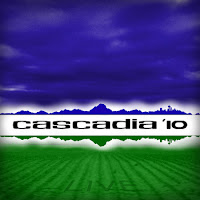 What they say about themselves:


Cascadia '10 is the echo of Afrobeat in the Pacific Northwest. A sound resonating from Nigeria to the Emerald City. A small army of experienced musicians bringing hypnoticly funky music to hips and feet. The members of C'10 also perform in other groups such as Marmalade, Soul Senate, & Fascination Nation; and have performed in groups such as Swamp Mama Johnson, Altered States of Funk, and Sly Lothario.

C'10 has opened for for international acts such as Sierra Leone's Refugee All-Stars and Garaj Mahal. They are currently playing various NW venues such as Nectar, ToST Lounge, and the Seamonster.

The music of Cascadia '10 consists mostly of original pieces, but it inherits from the rich legacy of Fela Kuti, Femi & Seun Kuti, Tony Allen, and the wellspring of music from Nigeria and throughout western Africa.

Thanks for the link, this is really good stuff. I dig my Afro Beat and this is right up there.