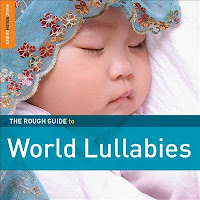 Marketing albums of lullabies must be a bit tricky. I mean, marketing -- particularly the marketing of global music -- is all about the exciting and the exotic. While lullabies are all about the soothing, the calming, the sleeping. There may be a small market niche of xenophiliac insomniacs out there, but I'm guessing they're at the far reaches of the long tail.

That said, I'm a big fan of global lullaby collections. I'm thinking specifically of Lullabies from the Axis of Evil, and Kitka's wonderful Cradle Songs. The new Rough Guide To World Lullabies may be somewhat less cohesive a collection than those, but it contains some gems, starting with Omara Portuondo singing the famous Cuban lullaby "Drume Negrita" and proceeding from there to Tahiti, Mali, Brazil, Madagascar, Colombia, and many other destinations. Like good children's books, the songs are generally soothing and comforting enough that they could put kids to sleep while remaining interesting and engaging to adult ears.

The liner notes may keep parents awake however. Consider the origin of the term "lullaby":

The Lilith, according to ancient mythology (it’s even described in the Babylonian Talmud), was believed to be a female demon that stole children in the night. Consequently, to protect children against the Lilith, mothers were known to hang amulets on the walls of their baby’s nursery, inscribed with the saying ‘Lilith Abi’ (essentially ‘Lilith, be gone’).

The sore thumb of this album is the contribution from the USA. Be honest: when you hear Cajun dance music, does it soothe you to sleep? The liner notes don't help, giving no suggestion whether "P’Tit Galop Our Mamou" by Michel “Beausoleil” Doucet is a lullaby; the song's qualification seems to be that it appeared as part of an album called Le Hoogie Boogie: Louisiana French Music for Children. Still, this is one small glitch in an otherwise strong album. Just skip it if small eyes are about to close.

Oh, and this compilation comes with a nice bonus album from Zimbabwean vocal group The Black Umfolosi 5, whose sound is similar to Ladysmith Black Mambazo. Wonderful smooth vocal harmonies, and even a cover of "Summertime."