We haven't had much klezmer on SoundRoots since July 4th(!), so let us ponder for a moment this happysad music of the Jewish people. I love the stuff, and wonder if perhaps I should have been Jewish. I mean, I don't eat pork, I obey the 10 Commandments (almost all of the time), and I still laugh at Adam Sandler's "Chanukah Song."

On the other hand, I love me some Dungeness crab, I hold Saturdays sacred mainly for soccer, and I don't much like Woody Allen movies. So I guess I won't go yarmulke shopping just yet. 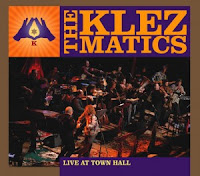 I would go shopping for music by the Klezmatics, and apparently so would many other people, since the band has been around for 25 years now.  Their new double CD celebrating their quarter-century mark is  Live at Town Hall. It's their second live outing following the 2004 disk Brother Moses Smote the Water, an album that explored the Old Testament overlap between Christians and Jews by combining klezmer and gospel music.

Returning from that earlier CD is stunning vocalist Joshua Nelson, singing "Elijah Rock" in his eerily Mahalia-Jacksonian voice. Other guests and former Klezmatic members joining the two original members still in the band -- Frank London and Lorin Sklamberg -- include David Krakauer (on "Rhythm + Jews With Horns Medley"), and Susan McKeown (on Woodie Guthrie's "Gonna Get Through This World").

"We wanted to celebrate with everyone who has been part of our family" says London. "It was impossible to bring some of those who live far away, but we managed to have just about everyone important who has ever been in or played with the Klezmatics on stage with us. It felt so good and natural and right. The energy was incredible, the love and mutual respect. We are blessed to be part of such a wonderful community."

For your listening pleasure, here's the traditional song "Dzhankoye" with its Russian-choir-inspired arrangement in a typically energetic Klezmatics arrangment with great strings.

[mp3] The Klezmatics: Dzhankoye
from the album Live at Town Hall