Monday's mp3: Music to Wake Your Children With 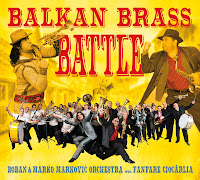 I like lullabies, those collections of soothing, personal songs often sung to children by their mothers. Sweet, gentle tunes that help usher young ones past the sometimes-scary darkness of night and into the refreshing embrace of slumber.

Balkan Brass Battle contains no such songs. Quite the opposite, this is the burly, brash sound that your father might use to keep you awake. Or, if your father is like my father, to wake you up rudely when you're trying to sleep in. Take the collaborative tune "Devla" ("devla" is a Serbian cry of delight, similar to the  the English phrase "Oh, my God!" -- an appropriate response to this amazing music),

Parental issues aside, Balkan Brass Battle brings together two of the best Balkan/Gypsy bands. The breathless promotion about the rivalry and competition between the two bands seems to be mostly publicist hype, though it does make for some fun, as in this blurb:

The showdown has been taking shape over the past decade. As Fanfare Ciocarlia arose from rural Romanian obscurity to storm stages they developed a reputation as the world's fastest, hardest Balkan brass band. Yet word reached them about another Gypsy brass band, one that had survived the Yugoslav Civil War, appeared on the soundtracks of Kusturica's crazed movies and considered themselves No 1: The Boban & Marko Markovic Orchestra. As the Markovics' began performing beyond Serbia they got to hear of Fanfare and how the Romanian raggamuffins had conquered the world. Boban, unbeaten heavyweight champion of Guca Brass Festival, was not about to let this pass and he brooded that Fanfare Ciocarlia claimed to be No 1. How could this be when he, surely, was King?

And who is King? The bands' tour isn't yet complete (see remaining tour dates below), and I'm not going to pronounce a winner. Except that this album -- crisply recorded and with enough energy to replace the outgoing Germany nuclear power plants -- is a clear winner, and will likely find space atop many Best World Music of 2011 lists.
Among the songs are competing versions of Ellington's "Caravan," along with other standards such as the "James Bond Theme," "Devla," and the record-label tribute "Asphalt Tango." If I have any misgivings about this otherwise fantastic album, it's that among the 13 Energizer-bunny tracks is a curious cover of "I Am Your Gummi Bear." Not being familiar with this classic, I spent several regrettable moments watching this video. Let's just say I prefer the brass, bearless version of the song.
Do yourself a favor and get this album. If you have young children, feel free to use this as a morning alarm clock. Years from now, they'll suddenly realize what a great dad you were, even if Mom and her lullabies get all the credit today.
Remaining 2011 Tour Dates: