[Read to the end for a chance to win tickets to the 7th New York Gypsy Festival!]

The summer weather is peaking here in the Pacific Northwest, but that doesn't mean part of me doesn't want to be in New York right tomorrow for the opening of the New York Gypsy Festival. Check out the schedule: 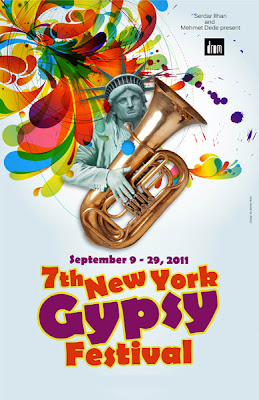 Freak Fandango Orchestra? You know you want to check them out. And despite the disappointment of Esma Redzepova dropping out due to visa problems, I wouldn't have any problem dancing all night to Zlatne Uste Brass Band. Raya Brass Band I don't know, but would gladly investigate. And the unique musical stylings of SoCalled are always worth a listen. Click the links above for video samples of the bands. And here's what the festival organizers say:

Over the last seven years the infamous festival's reputation has grown to one of national prominence. That which defines the Gypsy diaspora, tenacity, vivaciousness, variety and spirit, in turn defines our entire festival.

In preparation for the epic 7th edition of the New York Gypsy Festival we have lined up 15 headliners for the "loudest and proudest" festival New York has to offer. From klezmer hip-hop to flamenco funk, Balkan jazz & blues to indie-pop there is a little something for everyone on this year’s menu.


WIN A FESTIVAL PASS!
Wanna go? The generous festival folks may have a festival pass with your name on it. To enter, be the first person to answer the question: What is the name of SoCalled's first album?

Email your answer to SoundRootsBlog at gmail dot com, with the subject line "contest" (no quotes). The winner will be notified by email, and will be the envy of all of us unable to get to the festival this year.

It is amazing to see that excellent musicians have come together to showcase their talents and present their passion for what they do. Such festivals are definitely refreshing and special to be a part of.