Some years back I was exposed to the music of the Garifuna people on the Atlantic coast of Central America. It was one of those "wow!" moments, finding an amazing new sound, and a compelling history, in an unexpected place. Now I eagerly nab any Garifuna music I can find. It's that different from other music in Central America, and it's a great, unique sound. 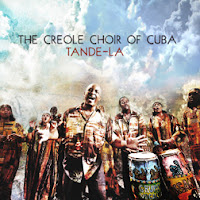 Now the Creole Choir of Cuba adds a category I didn't know existed on the island nation. On their new album Tande-La (which translates as "listen!"), their vocal songs evoke a bit of South African Zulu polyphony on the opening track "Edem Chante" -- then there's the nearly operatic (or musical theatric) sound, as on "Maroule." All mixed with plenty of Caribbean-sounding call-and response.

Where did this unusual music come from? I'm told it emerged with migrant Haitian workers, who blended musical styles as well as languages (they sing in Spanish, French, and Creole).

The Creole Choir - five men and five women - hail from beautiful Camagüey, Cuba's third city, an old colonial town, designated a UNESCO World heritage Site in 2008 for its iconic architecture. The group was founded in 1994 during the "Special Period" when the Cuban economy fell into a black hole following the end of the USSR and of Soviet support for the revolution. Food was short while homes and work places often went dark due to lack of electricity. It was at this difficult time that members of the Professional Choir of Camagüey who were descendents of Haitians, decided to re-forge the resistance songs and laments of their forebears. Lead by their Choir Director Emilia Díaz Chávez, Grupo Vocal Desandann, as they are called in Cuba, revived the songs of their ancestors for modern times. Desandann literally means ‘descendents’ and as the choir say: "For us music is like food, it feeds the spirit and is a major inspiration for everyday life". (source)

[mp3] The Creole Choir of Cuba: Maroule
from the album Tande-La

The Creole Choir of Cuba is touring the USA in September and November.

When I saw the Creole Choir of Cuba in your monthly list, I was already eagerly waiting for your review of them. They're indeed very good, some interesting harmonies. I definitely like Afro-Latin music!

Probably related to this, the big news in North-East Brazil is that Lirinha, the singer of Cordel do Fogo Encantado has made his first solo CD available for free download on his homepage (here). Produced by Pupilo, drummer of Nação Zumbi. I positively urge you to check it out!

Thanks for the heads-up on Lirinha -- I'm not familiar with his music, and will definitely nab that download and give a listen.