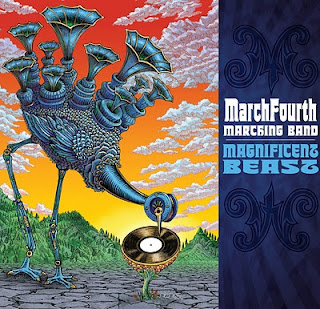 The day I receive a new album from MarchFourth Marching Band is a day that makes me smile. And dance more than a little. And laugh and pound furiously on any available surface. The fact that my first listen comes on the opening day of the Pacific Northwest's seasonal deluge (aka the months October through April) just makes it that much sweeter.

This large conglomerate of mashed-together brass, percussion, and other miscellany has appropriately entitled their new collection of 12 songs Magnificent Beast. Which is an apt description of their music, which ranges from the pseudo-heavy-metal of "Cowbell" to the smoky swing of "Rose City Strut" (they are, after all, from Portland, Oregon) featuring members of the Preservation Hall Jazz Band.

"We started off as an alt marching band. But then we took it to another level," says M4 co-founder, bassist, and bandleader John Averill. "We’ve turned into a dynamic dance band. We get the whole audience dancing and moving like a good funk band or an energetic DJ would."

“Except we’re way more mobile," adds dancer Faith Jennings. "We can get right in the middle of the crowd and really bring the music to the people."

While you really need to see this crazy bunch live to fully appreciate the level of sonic and social mayhem M4 can inspire, this energetic CD does give a tantalizing taste of their unique blend of funk, rock, folk, Bollywood ("Delhi Belly"), soul ("Skin Is Thin"), and other fragments they've picked up during their road trips. Here, for example, is a Latin-flavored morsel.