Today's post from Norwegian musician Jonas R-M tells of his improbable yet fruitful friendship and collaboration with Zimbabwean musician Blessing Chimanga. I love such stories of cultural and personal connection, and I suspect you will too.

This is the story about Blessing Chimanga’s newest single "Tiviranhu Vamwe" (We Are Family). It is for me an amazing and touching story about how music can transcend national borders. 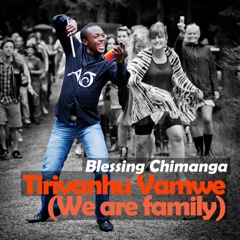 I met Blessing through a collaboration program called Umoja (a culture exchange between Norway, Mozambique, Zimbabwe and South Africa) this April. It was a two-week camp where we were put together in groups consisting of members from all the participating countries. We had all prepared our national shows before the camp and showed them to each other during the first days. There was no doubt that Blessing stood out as a little giant, especially on the up-beat Zimbabwean songs. I was truly happy when we were placed in the same group.

We clicked both socially and musically, and developed a friendship during the two weeks at the camp. Just three months later he financed his own trip  to Norway for catching up and playing music. Blessing landed in Oslo July 21nd. The next day we were only one kilometre from the bomb that set of the biggest attack on Norwegian ground since World War II. The situation was absurd – you invite a Zimbabwean to your home country that you have always conceived as peaceful. And then, on the second day of the stay, it turns into an inferno just outside your door.

We had planned a studio session during his stay, and we made the song "Tirivanhu Vamwe" on Friday 22nd of July – and if my memory serves me right, I think we finished it around 30 minutes before the blast. We didn't actually think about it then but the song's message is about unity, companionship and peace – the exact same values that was attacked by the terrorist that day, a few blocks down the street.

The happy and positive message, along with a dancy feeling that combines both Zimbabwean and western sound to a great fusion, might also be one of the reason of why it entered the top 100 charts here in Norway last week.

I think the story about how we met, and our colleagueship so far is a story about how music can create networks and even long lasting friendships, no matter where you come from. You can be a musician or just a music lover, but let the music guide you to new places, and you'll make friends you didn't yet knew existed.

(I hope you will take the time to listen to the track, and give some feedback.  The song is out on Amazon, Spotify, iTunes, tunetribe, emusic, etc..  Hope you enjoy it!)