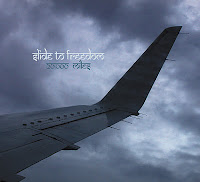 I love that once-ghettoized "world music" is getting so much traction in so many different directions these days. Indie rockers are including Balkan motifs (Beirut), or recording with West African singers (The Sway Machinery), or rediscovering old rock 'n' roll from Cambodia's past (The Cambodian Space Project). It's happening in other genres too: jazz, blues, instrumental.

Blending musical styles from India and America is nothing new in the big picture; it's not even new to the musicians who go under the name Slide To Freedom, as they've now released a third album after their self-titled 2007 release and the 2009 album Slide to Freedom 2: Make a Better World

The basic blend of blues slide guitar and Indian classical music carries over on the new album 20,000 Miles, but the new release adds some new layers and influences, including the gospel flavor of the  track "Still Small Voice," featuring the twangy vocals of singer Bettysoo. (Okay, admittedly the second album did include a version of Amazing Grace." But this is taking it up a notch.)

BettySoo is one of several additions to founding members Doug Cox (dobro) and Salil Bhatt (Indian slide guitar), and their friends Cassius Khan (vocals, tabla), Phillip Campbell (electric guitar), Amika Kushwaha (harmonium), and Carl Campbell (drums).  “Down in Memphis, we had three members of the Campbell Brothers, though the whole band came to watch. We had Calvin Cooke, a Korean-American singer, two guys from India, and a white guy, me,” Cox laughs. “When we were setting up, someone called Boo Mitchell,” the second-generation head of the legendary Royal Recording Studios. “They asked who he was recording, and he answered, ‘The Rainbow Coalition!’”

Soo relates how the members of the band -- from their remarkably diverse backgrounds -- came together musically:

At the start of the Memphis session, you could feel the different players ripple in and out of confidence, between riffing and tiptoeing because they didn’t want to stomp all over each other. We were all trying to get an idea of where the person would go next. But at the end of the day, everyone let loose. It was magical.

The magic is palpable, and the music coherent, even as the band shifts from Indian classical music to gospel to Americana to some fusion involving all of these. "Suicslide," for example, includes dueling vocals in gospel and konnokol style, dueling guitars, and a rhythm pairing drum kit and tabla. Underlying the whole album is a depth that springs in part, no doubt, from the spirituality inherent in the sacred steel and Indian music traditions. It's rich, deep, and compelling.

The odd track out is the cover of "Spooky" (yes, the "life is kinda crazy with a spooky little girl like you" song). Cox sings adequately and the tabla and slide guitar make it an interesting and unusual version, though it doesn't really mesh with the rest of the album. Which makes puzzling the decision to put it as the first track. I recommend starting on track 2, and considering this a bonus track. Makes more sense that way.


I have no idea how record stores/websites will try to categorize this album, but it's worth looking for if you're already enjoying other global collaborations, or if you need an accessible start to expanding your tastes in that direction.