Monday's mp3: Sing for Your Lives! 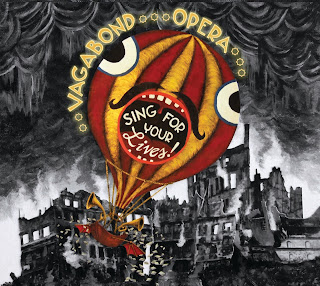 Late at night, when most of us past our 20s are long asleep, a musical underground unites fans of Yiddish theater, steampunk culture, klezmer, operatic rock (or rock arias), tango, and musical storytelling. And the chief purveyors of this music are the mysterious troupe known as Vagabond Opera.

We've delved into this band's mysteries a couple of times on Spin The Globe, including a recent studio visit just prior to the release of their latest recording, Sing for Your Lives! On the album, as in the studio, VO weaves an irresistible musical web that will appeal to, well, anyone who likes a great story. It begins with "Red Balloon," a tale of love, exploration, and adventure above the city of Bordeaux with Robin Jackson's tenor floating above cello, accordion, drum, and bass.

Like the odd and amusing "Beard & Moustache" on which Polish vocalist Ashia Grzesik sings of her deep desire for manly facial hair, there's little that would make you stand up and declare "this is world music!" Yet between these songs is "Tough Mazel," a pretty straight up klezmer piece. And there's Balkan influence here as well, on "King of the Gypsies." And perhaps my favorite is the swinging "Hanumonsoon," which is not so much Bollywood (as you might expect from the title), but what you might hear if Yma Sumac had been from Serbia.

from the album Sing for Your Lives!

That an operatic element frequently makes an appearance is no accident. "We've always asked, 'Why not work in this beautiful medium, opera, but  surround it with all these unexpected instruments and sights and stories?'" says tenor/accordionist Eric Stern. "We take this big, ambitious art form and distill
it. We make it portable."

The band blends ethnicities, languages (including made-up ones), and instruments in a unique way that, despite the odds, works. They've just finished a US tour (including a show at SteamCon), just wait and they'll swing by your neighborhood again soon. They're vagabonds after all. Until then, check out this unique, entertaining CD from a band that wants you to start loving opera...their kind of opera.