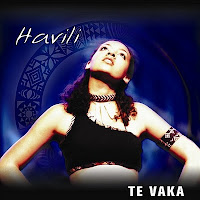 Te Vaka is a band with an ambitious plan. They're pan-Polynesian ambassadors, not only working to keep traditions alive throughout their various island homes, but also bringing Polynesian music to the entire world. The band's 7th album is called Havili, which translates as "Breeze Blowing," an apt metaphor for the group's travels and influence.

I'd heard their albums Te Vaka (1997) and Ki Mua (1999) before finally seeing Te Vaka live at Seattle's WOMAD in 2000. Their performance became one of the festival's highlights for me, and it wasn't only because I watched it sitting beside Hanitra and Noro from the group Tarika (though that was a nice bonus!). No, it was their energy and movement and harmonies and those great log drums. Stuff that's hard to capture on a mere recording.

The new CD has the stuff you've come to expect from Te Vaka: great harmonies, guitar work, log drums, haka. Add to that a few bonus sounds, including didgeridoo (on "Luga Ma Lalo"), strings (on "Lovely World"), and various guest vocals. Round it out with a mix of traditional and contemporary sounds (for the latter, check out "Moemiti" and "Kofu O Lakau"), sweat the details in recording and mixing, and you've got one stellar offering. Highly recommended, whether you're new to the sounds of Te Vaka or still remember fondly that summer day at Marymoor Park more than a decade ago.

From the band's blog:

What an incredible journey it has been, the writing, recording, mixing and mastering of this album has at times stretched us all. No matter the obstacles we were all determined that this Te Vaka album would be special. The decision to record a live album, made by first time producer Manase Foai, contributed greatly to making this album something that we are all extremely proud of. Recording in the best facilities available to us has definitely enhanced the richness and quality of the songs. We are relieved that the job is finally done and couldn't be more happy with the outcome.