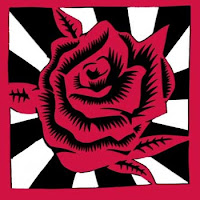 Around the SoundRoots offices (well, office... or rather, desk), Balkan brass music is always welcome. Even if it doesn't come from the Balkans. We've hobnobbed with the Bay Area's Brass Menazeri, and now from the right coast comes the lip-numbing blast of Raya Brass Band. If you're a brass fan, you'll be hooked from the opening notes of the rambunctious "Djevadov Čoček" to the last swinging notes of "Nevestinsko Oro."

Between those two are ten other metallic wonders, rooted in the Balkans but given a definitive injection of New World style that hints at funk, punk, and other junk. The music is in your face and demands your participation in its swirling energy. Which really makes me want to see Raya BB live...and soon.

It was live performance (and audience participation) that drew the band members to this style of music. “When I was in Greece, I remember hearing this incredible music coming down street. It was a brass band, wandering through the village,” recalls accordion player Matthew Fass. “I was struck by the immediacy and the intimacy. That drew all of us to this. We don’t want to play on stage so much; we love to be out on the dance floor, to break down the walls between us and the audience.”

I somehow missed the band's 2009 self-titled CD, but I'm glad to catch up with them now. The album is out in January; here's a sneak peek (three more tracks up for the listening on their bandcamp page).