Monday's mp3: Meet the musical daughter of Angelique and Miriam 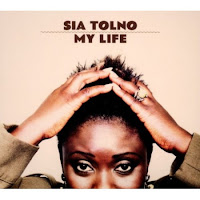 If her music wasn't so compelling, you might be drawn to Sia Tolno simply for her story of hardship and triumph. She fled an abusive home in Sierra Leone, then had to flee that country's civil war, ending up selling palm oil and singing in clubs in Guinea. It was there that she was "discovered" after her entry in a talent contest.

That's just a skimming summary of her story, because I want to focus on the music on Tolno's wonderful new album My Life. Many seem to compare her to Miriam Makeba, but I hear more Angelique Kidjo in her energetic delivery and in the sophisticated arrangements on this sophomore album. (Her debut, Eh Sanga, came out in 2009.)

The album with a tradition-rooted song in praise of the town of Blama in Sierra Leone, where Tolno used to attend a festival at the end of each year. The town was devastated by the war, but Tolno says "I wanted to tell people that in this town we had a very joyful festival, where we just sing and play all these traditional instruments. I wanted to open with my tradition, to show where I am from."

Tolno dips into various African music styles on the album, and the instrumentation and arrangements might force you into guess after guess about the music's origins. Let's just say that it comes across as modern African music -- with some funk here, some balafon there, and a whole lot of powerful vocals in various language, often delivering conscious lyrics, as on this song:

from the album My Life