I was pulling out the holiday tunes the other day, thinking of which of the crazy global versions of Christmas carols I would share here and on on the radio. I hadn't seen any new releases worth talking about this year. Until this arrived. I'm not familiar with Jennifer Cutting or her Ocean Orchestra, but in this cold season I'm warming to their music. 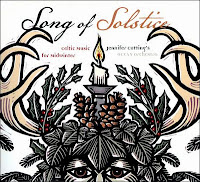 The album in question is called Song of Solstice, and is billed as a collection of originals and rare Celtic and medieval songs. It's rather refreshing how the 12 tracks celebrate the different faith observances of the season, most directly Christian and Pagan (and the song "Light the Winter's Dark" wraps in Islam and Buddhism as well). We are all in this cold dark winter thing together, after all.

Much of the music has a distinctly acoustic Celtic feel to it, including the male-voice "Song of Solstice" and "Green Man," both originals. The Emily Bronte poem "Fall, Leaves, Fall" gets a somewhat overwrought arrangement -- the orchestration curiously floral for lyrics celebrating the death of the season -- with a short section of guitar-led rock anthem. The rock-anthem sound emerges again in the latter half of "Time to Remember the Poor," before the album ends with the nicely harmonized men's a capella "Light in the Winter's Dark," the Scottish lullaby to Jesus "Baloo, Lammy," and finally a song celebrating the circular Celtic view of time on "Summer Will Come 'round Again."

This fresh collection of carols, chants, and hymns to the season may even have the power to rejuvenate the jaded hater of holiday tunes. At the very least it's a change of pace. Though I'm still going to be listening to the Klezmer Nutcracker sometime soon.

from the album Song of Solstice