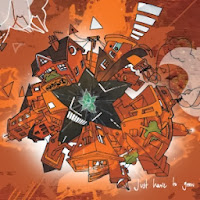 This is one album I held back from the haiku treatment; I was curious to give it another thoughtful listen. The official bio for Awalé says the band plays "Afro Gipsy Beat" and was founded in London in 2009. They're a multicultural lot, with members from Cuba, France, England, Slovakia, and Tunesia. They reach even farther for musical influences, including Ethiopian, Latin, and Congolese elements.

That may sound like the recipe for a muddled mess, but the arrangements on band's debut album, Just Have to Grow, offset this cultural complexity with catchy melodies and danceable rhythms.

I love the voice of Badiaa Bouhrizi; she brings a jazzy sensibility and spices up several tracks with vocal runs that drift like windblown sand. My favorite at present is the Ethiopian-flavored "Merhaba," on which her voice plays tag with a staccato horn line.

from the album Just Have to Grow

Yet her voice is perhaps too feminine to fully carry the weight of the more Afrobeat-flavored tracks like "Seddick." Or maybe I just have odd preconceptions that Afrobeat vocals should carry a power -- even an anger -- that matches the furious horns and rhythms and solos.

My perhaps more-substantial issue is with the band's claim to "Gipsy" sounds. I don't hear it; and I wonder if it might be a misguided description intended to convey their wandering influences.

Those are minor quibbles on an otherwise compelling first album, and any music fan curious about the intersections of jazz, funk, North African, and Ethiopian musics will find this a compelling listen.