Oops, I spoiled the punchline. 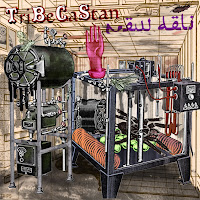 A couple years ago, in reviewing TriBeCaStan's Strange Cousin, I wrote that I'd begun "thinking of TriBeCaStan as something of an American version of 3 Mustaphas 3" though they "don't take their national mythology to such lengths as their British predecessors."

I stand corrected. Both the music and the liner notes of the band's latest offering, entitled New Deli, prove the duo of John Kruth and Jeff Greene to be just as untethered as their UK counterparts. And I mean that in a good way. Their music is crisper and better arranged than ever, with musical influences from around the world blended in a way that will guarantee head-scratching answers from anyone you pressed into guessing its origins.

Along with a slew of originals, they go all free jazz on "Two for Ornette (Dee Dee/Theme from a Symphony)" and twist around the rock classic "Please Don't Let Me Be Misunderstood."

I've been mulling the end of "world music" as we knew it for a couple of decades, and this album adds fuel to that argument. It's worldly, but not world music. Great musicianship, but without roots in any distinct culture. Says Greene:

We’ve not only been inspired by world-class global musicians like Bachir Attar of the Master Musicians of Jajouka, Carnatic mandolin master U. Rajesh, and the Austrian hurdy-gurdy virtuoso Mathias Loibner, we invited them to play as guests on New Deli.  As we say in TriBeCaStan, "If your toes all face one way, you will walk crooked." This means we must be in solidarity with all of the world to find the right direction. If you dig around in the '60s and '70s in music from India, Thailand and Ethiopia you hear how the musicians borrowed from and reworked American music. We’re just doing the same thing, but in reverse.

Imagine those foreign influences in a 60-mph head on collision with American folk and blues -- not a limb-threatening real-life collision, but the kind you see in movies, where everything slows down and there's a beautiful symphony of glass shards, mangled chrome, and actors with the uncanny ability not to smush their eyes shut and scream "Oh crap!" -- and you'll have the beginning of an inkling of what this sounds like.

Or you could just listen to this:

And those liner notes? Here's a whiff


Hello my friend! Very much, Hello! You are totally very welcome to the Grand Opening of TriBeCaStan's New Deli. Please to fill your ears until your heart and brains belch with satisfaction and contentedness from the many delights of our sumptuous sonic smorgasbord. As our most esteemed patron, you are absolutely invited to savor all of our delicious 32 flavors - one more than Mr. Big Shot ice cream man across the street, with his minuscule 31. Have you ever experienced anything like our yummy Marimba Mandolin Marmalade? Of course not! While poor Mr. Bobbins forces gangs of unpaid, underprivileged children to toil deep into the night, under the flickering of a single light bulb to invent such convoluted concoctions as his Chicken-Fried Sardine Peanut Butter Rumba Crunch, TriBeCaStan's musical Marco Polos, effendis Kruth and Greene, go chasin' down the genuine flava around the globe and bring it all home to you, my friend.

On the world map TriBeCaStan may be hard to find, but musically they're finding their home, and it's a wondrous land populated by sounds of all nations, living mostly in harmony.

Email ThisBlogThis!Share to TwitterShare to FacebookShare to Pinterest
Labels: TriBeCaStan