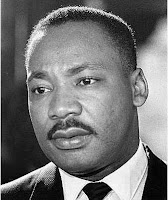 I've had some time to think today about Dr. Martin Luther King Jr.'s dream, and about the changes to the social landscape during my life. Huge, mostly progressive changes. Changes that came at no small cost, however.

Some of this was prompted by catching a bit of the TV series Roots earlier today. The Africans chained in the belly of a white man's "canoe house" were talking. When I first saw Roots as a kid, their talk would have been as incomprehensible to me as their destination was to them.

Now, however, I can put some flesh on the bones of those words. While I still haven't been to West Africa (donations to the travel fund graciously accepted!), the music of the region has been a gateway for me to learn about the people and culture as well. When the en-route slaves talk of the Fulani, I think of the amazing Fulani flute sound, for example. You may also think of the djembe, or the kora, or the ngoni (precursor to the American banjo -- unless you subscribe to the theory that it was the ekonting instead). In any case, each enslaved person brought their tribe's own traditions: spiritual, social, culinary, musical.

As a result, the traditions of West Africa permeate the music and spirituality and culture of the western hemisphere today, but prior to Roots, the increase of interest in "world music" and other aspects of globalization, the links were largely unacknowledged, at least by the dominant culture.

That's one change. And then there are the legal and economic changes. The Civil Rights Act and numerous other laws leveled the American playing field, at least officially. I'm still aghast that if I'd been born a bit earlier or in another state, racial "purity" laws would have prevented me from marrying my now longtime spouse. This isn't ancient history, kids.

MLK's work was about economic justice as well, and progress in that area lags even farther behind. Corporations as "people"? Corporate executives making 434 times as much money on average as aworker? Sigh.

Bottom line: MKL's dream is still just a dream. The racial equality is closer to reality, the economic part not so much. And that's not good enough. If I can educate and inspire through SoundRoots and my radio show, great. If you can use your skills and abilities to improve the world, that helps too. This isn't about politics, it's about humanity. From you and me to the head of Monsanto and Wal*Mart, we all have to share this world.

As King said, "An individual has not started living until he can rise above the narrow confines of his individualistic concerns to the broader concerns of all humanity."