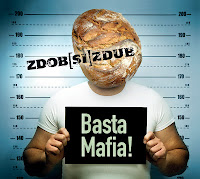 My first encounter with Moldavian band Zdob si Zdub was with their 2003 album 450 De Oi (450 Sheep), a fascinating if uneven blend of traditional folk and hip-hop. I've missed a couple albums since then, and they've undoubtedly gone to other interesting places before arriving at the current pop / punk / folk / rock blend on display in their latest release, Basta Mafia!

While some tracks, like "Running," have the short-shelf-life feeling of mediocre Western pop, the band generally hits more interesting notes, from the energetic ska-flavored title track demanding and end to corrupt practices, the electronics+guitar-driven touring-trevails song "Gypsy Life."

Though their music has some connection to traditional Eastern European folk, this is thoroughly modern stuff. Turns out you don't need Gogol Bordello to have a collision between punk and Gypsy; the natives are doing it for themselves.

You'll notice that in just three paragraphs I've used a remarkably variety of terms to describe the band's music: folk, hip-hop, punk, ska, Gypsy, electronic. All accurate, and yet just part of the story. An interview answer shows that even the band themselves have trouble defining their musical style.

The fact is that we will never fit under a standard term of musical styles. Hard to say. It seems we use some ethnics, but we do not seem to be ethno-rock as such, but we also are not completely underground, not hardcore. It is not clear at all. We are very difficult to identify. This is not an easy substance. Well, probably, our main feature is that we are always on the brink.

Bottom line: you probably won't call this "world music." Maybe "Euro-rock with ska/punk sensibilities." But for a moment, forget about musical labels, and listen.

from the album Basta Mafia!