Transportation and technology seem to make anything possible these days in terms of musical collaboration. SoundRoots hears news and music from many genre-busting, border-defying artists and groups, which makes us generally quite happy. Not all are musically successful, but each is (at least in theory) a step toward a more globalized music, a more interconnected and understanding world. 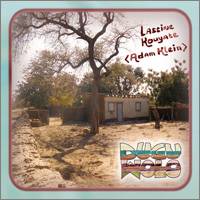 Now and then one of these releases truly stands out, however. Like today's subject, the new album Dugu Wolo from Athens, Georgia-based Adam Klein. I'm not familiar with his previous releases, for which  reviewers seem to use terms like "dusty" and "rustic." Of course, it turns out that such terms fit well with West African village life as well. Perhaps this is the link between Georgia and Mali.

Perhaps what I like best about this music is that Klein, while singing in Bambara, sounds natural, comfortable. He sounds like who he is: an American deeply steeped in West African music. But rather than try to lose himself in this "foreign" tradition, he seems to find himself it it. You won't mistake his singing for that of Habib Koite or Salif Keita or any other African, and I love that. It makes this album ever more a bridge between two worlds.

With that many musicians, you might expect a big sound. But Dugu Wolo has a quiet, instrumental feel, like an evening jam session under a tree with children running about. Except that the recording is clear and distraction free. It's released on Klein's own label, Cowboy Angel Music.

The liner notes do a great job telling Klein's story, including a chance taxicab meeting with Djelimady Tounkara! He tells a bit about the recording of the album as well:

I was in Bamako expecting to record at a particular studio, but the plans fell through at the last minute. So I was stranded. I had a filmmaker with me, and four days to make the album. Solo Tounkara took me to Baba's studio one afternoon, and we arranged to record there. The following day I went in and played and sang the songs on acoustic guitar, and it built from there. Solo added some guitar, calabash came in, kora, ngoni, then tama. The songs were built quickly. We didn’t labor over sound or vocals. It’s meant to capture the songs in their pure, natural form, and speak for itself. And I think it achieves that in a really compelling, lasting way.